The racing season 2016 has started again. We have all our birds (culture and fly) on 6 January 2016 linked and that went to full satisfaction. At this time, 12 april, do we have 73 youngsters. Almost the same number as last year. A good number to start the coming period underway. In the first week of March, we have separated the hens from the cocks and we slowly started training the racers. Saturday 26 March we took our cocks and hens a few kilometers away It turned out to be a tough job to return home quickly, but after 2 hours they were all back. Then you see all the older experienced pigeons be able to but the yearling pigeons have it very hard to find the straight line towards the loft.

Saturday 2 April was the first training flight with the Circle of our department. The weather forecasts were good and that's why we basketed them all and we were satisfied with the way they came home. It wasn't easy but they all came home in the end. 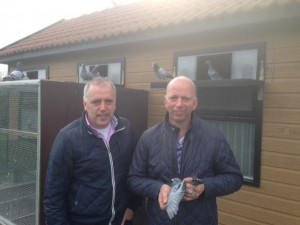 Peter and Rene met them 384

On Saturday 9 april, this began to points. The pigeons went to Deurne with a distance of 128 kilometer. It was a nice flight with a speed of almost 95 km per hour. So the first ones were in an hour and 20 minutes back home. The 1st was a yearling hen, from 2015-1331384. When she got home she flew another round and after landing on the run she stayed quiet for a while. We quickly drove her in she was clocked at 12.06.28. When she got in, the 2e in 3e Dove already flown. These also flew an extra round. This one 2 were both clocked at 12.07. After that, a few flew in every minute. After we had called around a bit, we knew that the first pigeon was on time but that she eventually got the 1e of the entire circle of our department at about 6.650 pigeons that was a fantastic start. Also because the wind was SE and normally no 1e can be obtained from the circle. It turns out that it is always impossible to predict where the top pigeons will end up in the results. All the more a super performance from this yearling. (stems from 75% off the Heremans line and 25% from our own line) In the association we started with a 1st, 2e, and 3rd place with 10 pigeons in the first 22. We had total 45 basketed for points and it flew 23 price. Thus, a percentage of 51% on the first flight. A good start. Click here for the results

On to the next few weeks and hopefully the weather will be nice Saturday pigeons again with those blue skies and white fleecy clouds on the sky. As the predictions are now that is doubtful but it is only Tuesday and it could be completely different.