Already many years playing the brothers René and Peter's excellent capabilities. This season goes over smoothly with nice victories against large numbers of pigeons. The highlight of this early season is the fastest pigeon of the entire Department 9 East Netherlands against 29.503 pigeons. 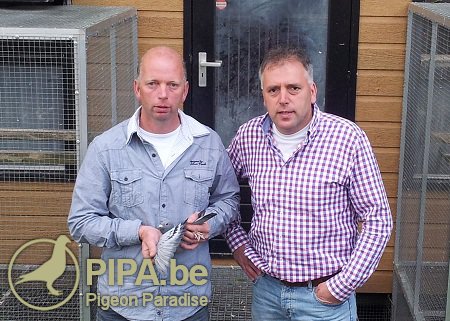 As indicated before, the hardworking brothers on their beloved game types vitesse, middle distance and the youngster flights oversized. Within the entire department 9 East Netherlands (circa 2.500 membership) they were in 2011 crowned 1st Designated Speed ​​Champion. A year later, this is a great follow-through as Unassigned 2nd Velocity Champion crossed the line to be. When the pigeons can hold the level and forme as the past few weeks will also be a success again this year.

René (43) is the younger of the two brothers fanatical and take the bulk of the care for his account. Before he goes to work, The pigeons are only fed and quickly glanced at the lofts. In the evenings he tries between 17.30 in 20.00 hours to make appointments so that he has the opportunity at this time to take care of his feathered friends. Peter (47), working as a payroll administrator, is the helping hand on Saturday, handles the entire administration and the training flights of pigeons. On the day of basketing determine the men together which pigeons go with it to keep the honor of the brothers high.

Our hosts play their showpieces total widowhood with both the cocks and the hens are basketed. Basically, from the first to the last official old birds race all along, what comes out annually by approximately 16 flee. "Over the course of the season, but we'll be keeping pigeons at home. Mostly males from performing hens or birds that indicate they do not fit into the regime ", René indicates. The pigeons get during the season, every day the same amount and composition of food dished.

In the selection focuses mainly on the performances, but keeping an eye also to the origins. In addition, annually pigeons guru Gert-Jan Beute asked for its opinion and taken into account its findings in the assessment of a dove.

The 17 meter loft of the brothers is behind the farm from father Bernard (79) and mother Hilda (74). Together they also take care of the 80 present youngsters themselves. It is a loft without too much fuss: no heating or other artificial ways to bring the pigeons in shape. “When we were in the new loft 2005 started building we chose a deep hole (3 m). Thus, the loft is highly oxygenated and the weather is less important to the pleasant climate inside the loft ", said Peter, which wants to leave nothing to chance.

Out of the blocks

That the pigeons have the Overijssel territory like their, is evident when we look at the way they want to return here:

The rise in the performance curve came when René and Peter on the total sales of the late H. Wermelink (Oldenzaal, NL) a number of Janssen pigeons bought. The current patriarch of the loft, Magic Man (NL96-1580149), is such a phenomenon that has been grown from two of these pigeons purchased. Besides himself a gracious kite Magic Man has also been a great sire and he put ao. Magic Woman (NL00-1356644) on the world. They will, in turn, a great offspring. Click here for the pedigree of Magic Man. 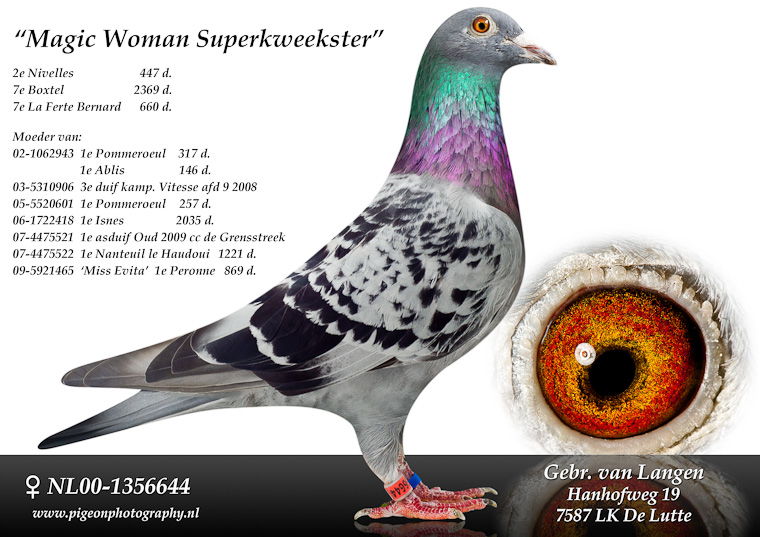 De in 1994 purchased pigeons still run as a thread through the entire colony of Langen. She worries, crossed with pigeons that are brought to Kas and Karel Meijers (Ootmarsum, NL) en Jan van de Pasch (Grubbenvorst, NL), for a great offspring. A good example is Diamond (NL11-5002783). Diamond left to themselves this year from Chimay 16:12:56 h observed and reached a speed of this 1.927 m/min. Diamond not only managed to achieve an impressive speed, but was also the fastest of the entire discharge Department 9 East Netherlands against 29.503 pigeons. Click here for the pedigree of Diamond.

Nice anecdote to this victory is that the original cock Diamond two weeks before seriously flew home was gone and on the day of basketing was not healed enough. On the day of basketing was called on the thus show a different, “stranger” duller put at Diamond in the breeding loft. Perhaps this hair so motivated that she was capable of such awesome power explosion. “So there you have it: good fly is not in a jar, but and make a bit of luck with everything well motivated pigeons”, gives the sober René to.

If we ask our hosts what they want yet lost, give them to: "We need to talk to are all positive about our great hobby and passion into the sport and help each other instead of against each other everywhere kicking. Let convey how beautiful our sport is and what an immense pleasure you can get from it. Here you achieve much more with it. "This statement characterizes the athleticism of our hosts, who play to win the first, but these certainly give another.

This season, René and Peter are not likely to participate in the long distance races. "Peter has peace not here for, The long wait is nothing for him ", gives the smiling René to. Peter fills him: "We have, Partly because of this, the objective again this year in the sprint races (speed, middle distance and youngsters) early birds and beautiful series run. We therefore do everything possible to achieve a division championship in these disciplines. "

Given the class in the lofts, commitment, the precision and the passion with which they practice the sport, this is certainly a possibility. Gentlemen, success !